(December 17, 2015 - Hamilton) Members, sponsors and friends of the REALTORS® Association of  Hamilton-Burlington (RAHB) showed their generosity and community spirit by raising $65,950 for the 00CHML/Y108/953 Fresh FM Children’s Fund. The funds were raised at the recent RAHB REALTORS® 4 Kids Charity Auction, held annually to support The Children’s Fund. 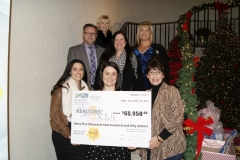 “This auction shows the great things that happen when REALTORS® and the community come together,” said Marlene Vieira Leslie, Chair of this year’s Charity Auction Task Force. “The support we received was amazing.”

Proceeds from the partnership between RAHB and the CORUS radio stations support many children’s charities throughout the Hamilton and Burlington areas year round.

“The money raised through this auction helps so many organizations which support children and children’s causes,” added Marlene Vieira Leslie. “We are proud to help the community in which we work and live.”

The Children’s Fund Campaign began in 1976 as a charitable initiative to help raise money for disadvantaged children during the holiday season. Over the 27 years of the partnership, RAHB’s annual auction has raised over $903,950 for the charity, making RAHB its single largest contributor. The Children’s Fund offers assistance to over 40 different charities each year.

Established in 1921 the REALTORS® Association of Hamilton-Burlington (RAHB) represents more than 2,900 real estate brokers and salespersons from Hamilton, Burlington and outlying areas. Members of the association may use the REALTOR® trademark, which identifies them as real estate professionals who subscribe to a strict code of ethics. The association operates the local Multiple Listing Service® (MLS®) and provides ongoing professional education courses for its members. In addition, RAHB is an active participant in the Home Ownership Affordability Partnership (HOAP) and holds an annual auction in support of local charities. Advertisements of local MLS® property listings and information about the services provided by a REALTOR® can be found at www.REALTOR.ca. More information about RAHB is available at www.rahb.ca.